Householders & Businesses Encouraged to Reuse more, as less than 5% of disposed items are reused #ReuseMonth 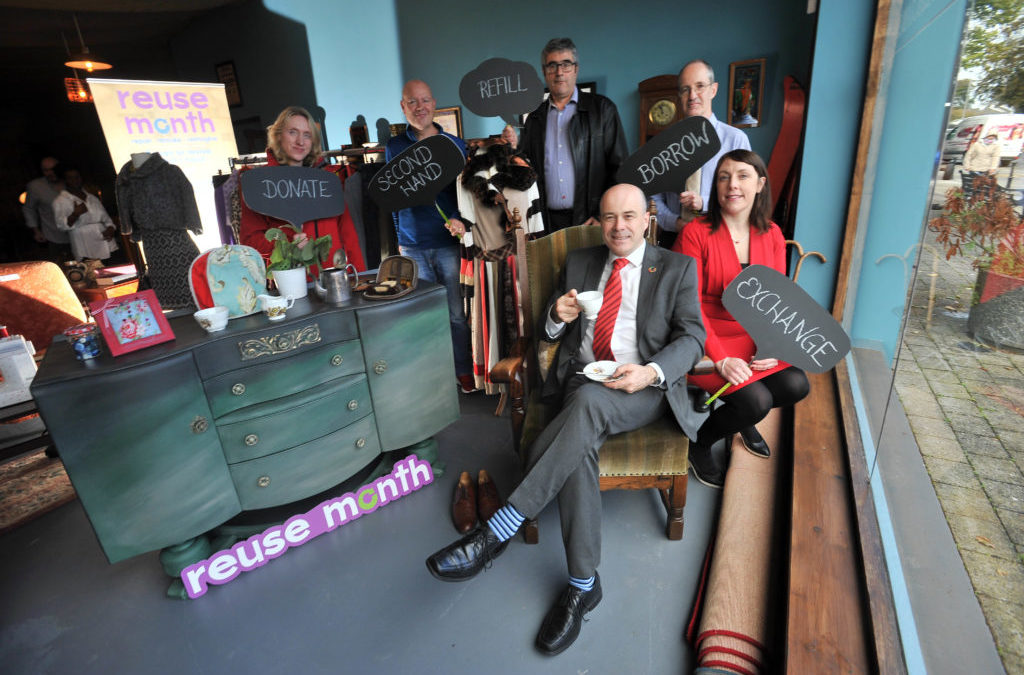 IT is estimated that Irish households reuse less than 5% of the amount of waste discarded every year, even though people continuously reuse certain items on a daily basis.

Inspired by this figure, Ireland’s three Waste Management Offices (Connacht/Ulster, Eastern/Midlands, and Southern) supported by Ireland’s 31 local authorities have one clear aim during this October’s Reuse Month, that is to make people and businesses aware of how they already reuse goods, while inspiring them to do just that little bit more.

The Community Reuse Network Ireland (CRNI) is directing Reuse Month events, seminars and information points throughout every region and county, which will provide people with the skills, tools and know how to reuse more.

At the launch of Reuse Month 2018 in Roscommon, Denis Naughten TD, Minister for Communications, Climate Action and Environment with Michelle Fallon, Owner, Michelle Made This.

At the launch of Reuse Month 2018 in Roscommon, Minister for Communications, Climate Action & Environment Denis Naughten said, “People already reuse items as part of their everyday lives, at home, at work and at play. For example many people have their favourite shoes resoled rather than replacing them, borrow books from the library, or share tools and equipment when doing jobs around the house.

These habits all avoid the need to manufacture and distribute new products and cuts down on waste, thereby reducing greenhouse gas emissions. National Reuse Month is about growing these habit of buying second hand and upcycled, prioritising repair, borrowing, swapping and refilling. We all do it to some degree, by doing a little bit more we are benefiting our whole community and environment,” he added.

Speaking on behalf of Ireland’s three regional waste management offices Sinéad Ní Mhainnín Waste Prevention Officer with the Connacht Ulster Regional Waste Management Office said, “Reuse is about valuing what we have, by using and reusing it for as long and as often as possible. It is also about considering alternative options to buying new items we might only use once. It opens up the possibility of borrowing, repurposing or purchasing good quality reused goods.

As part of Reuse Month, blogger and journalist Rosemary MacCabe takes on the challenge to reuse as much as possible throughout the day.

Reuse has obvious benefits to the environment, but there are also huge knock on effects for our personal finances and the general economy,” she added.

CRNI is the all-Ireland representative body for community based reuse, recycling and waste prevention organisations.

Its member reused an estimated 20,400 tonnes of goods last year and recycled over 57,000 tonnes. Their efforts sustained more than 800 jobs, 350 job scheme training positions and 7,600 voluntary positions resulting in a turnover of more than €80 million.

Claire Downey CRNI Executive said, “It is estimated that we disposed or recycled 2.5 million tonnes of waste in 2014*, making our reuse rate less than 1% of that total. Even if five times this amount was reused, taking account of any online exchanges, vintage stores, swap sites or car boot sales not included in the CRNI study, it still indicates that less than 5% of all of the goods we throw away are actually reused,” she added.

But it is not all bad news. Most people reuse items on a daily basis whether it is borrowing a book from a library or a friend, shopping for a special present in an antique shop or passing on a school uniform from one child to the next. Reuse Month is about building on that good work, and becoming more aware of how we can reuse even more everyday items rather than just disposing of them.”

For a full list of events during Reuse Month and further tips on how to reuse more see www.reusemonth.ie